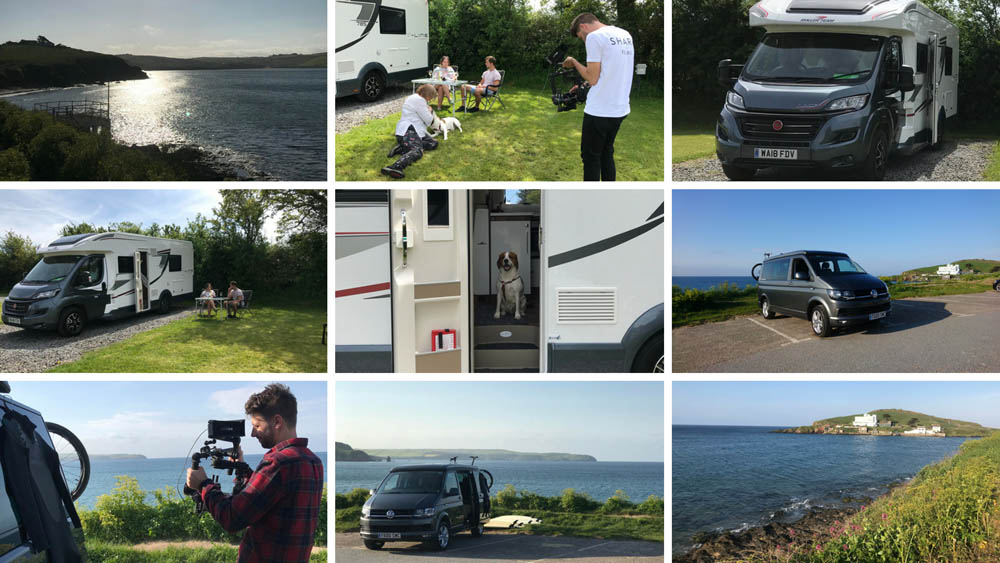 After plenty of research, numerous emails, route planning, prop gathering and one postponement due to bad weather, Thursday 17th May saw us head out for a day of filming with Chris from local company Sharp Films, covering over 100 miles of the finest Devon coastline and countryside. The vehicles of choice were Columbus (VW T6 Kombi) and Armstrong (Roller Team T-Line 785). We opted for one of our ‘go anywhere’ vans and a luxury motorhome, as we wanted to capture the different styles of camper breaks that these vehicles offer.

It was a bright and early start with a full day of filming ahead, but the weather was perfect for it, beautiful sunshine and clear blue skies - we couldn’t have asked for better! We left the South West Camper Hire base in Columbus and headed to Bigbury-On-Sea ready for our 7am start.

We’d arranged for an actress, Katie and an actor, Luke to star in the video (thanks to Debbie Burdon Casting) and after navigating our way through the winding country roads and nearby villages, everyone found their way to the meeting point. Once there, it was time to polish up Columbus ready for the shoot while enjoying the sunrise and views of Burgh Island!

As it was so early, the location was empty (other than us), offering stunning views, so we took the opportunity to capture some photos of Columbus while Chris set up his kit. With such beautiful views wherever you look, it’s no wonder it’s known as an area of outstanding beauty. We would highly recommend a trip to Bigbury-On-Sea in one of our VW campers, and if you’re a fan of watersports, there’s a surf school on the seafront hiring everything from surfboards to kayaks, so you won’t even need to bring your own equipment.

Once Chris was set up and props were in place, it was time to roll. As you can imagine, capturing close-ups inside a VW camper alongside three adults and a range of camera equipment was a little tricky, so here are some sneaky shots we caught of Chris in action to show you how it’s done…

We wrapped up at Bigbury on Sea just after midday, ready to head back to base and swap Columbus for Armstrong, and a quick pit stop for lunch on the way. Once we’d changed over, we visited our second location of the day, Teign Valley, Barley Meadow Campsite on the edge of Dartmoor, which we can highly recommend for a stay. They found us a great pitch, so we parked up and prepared to film one of our luxury motorhomes.

It’s safe to say that Katie and Luke had a relaxing afternoon at Barley Meadow, sipping on wine and walking Jasper the dog (all for the sake of filming of course), while Chris was still hard at work capturing footage. As all of our campers and motorhomes are dog-friendly, we invited Jasper the dog along for the afternoon and offered him a starring role. We’re pleased to report that he approved of our dog-friendly campers!

We’ve seen the first cut of the video, and think it captures the camper lifestyle perfectly. We can’t wait to show you the finished product, so keep an eye on our social media to see it first!

A big thanks to Chris from Sharp Films, Katie, Luke and Jasper the dog for their starring roles and Teign Valley Barley Meadow Campsite for lending us a pitch for the afternoon.

If you’re interested in hiring a campervan or motorhome for your next break, meet our vans to find out more or head to our booking calendar to check availability.

We highly recommend SWCH
Highly recommend using South West Camper Hire! Julian is a top bloke and very helpful. This is the second time we have hired and have no complaints. The vans are clean, well equipped and drive well. Looking forward to our next adventure and we will definitely use South West Camper Hire again.
James Morris
Excellent Service
The owner, Julian, provided an excellent service. The initial instructions were clear, the van was spotlessly clean, in excellent order and very well equipped. We would certainly use them again and would recommend others to do so.
Jane Ballantyne
This was one of our favourite holidays
I'm so glad Google led me to there site, Julian is very easy to deal with and the website is very user friendly with plenty of information and pictures. The units are well equipped and maintained and there are a huge range of extras to book such as gazebos and chairs and bedding packs. If you're looking to hire a camper or motorhome then I can recommend Julian and South West Camper Hire with no reservations.
Anthony Matthews
Wish we had booked it for a week...
Our first motorhome experience after years of camping was an amazing adventure from start to finish. Julian couldn’t have been more helpful, the van was spotlessly clean and the handover told us all we needed to know. We had our young dog with us and the freedom of being able to park up on Dartmoor, make lunch and go for a walk before pottering down to the coast was just perfect. Can’t wait for our next trip!
Jane & Rory Bruce
A pleasure to do business with
Tremendous. Cheerful, effective and fuss-free. Good value. A pleasure to do business with. Will cheerfully use again.
Ian Gordon
Would highly recommend
Excellent company to deal with, friendly personal service and we stayed in a lovely new motorhome. Great communication from our first enquiry right through to handing the van back. Would highly recommend
Blair Somers
Top notch holiday
We had a fantastic time in our VW T5 and cannot recommend SWCH highly enough. Attention to detail meant all stress was taken out of the trip and Julian very personable, friendly and on hand to answer any queries. Top notch!
Steve Bartholomew
Already Planning Another Trip
Thank you Julian for our amazing week in the Fiat Armstrong campervan. Your efficient friendly service from initial email to final return of vehicle was second to none. The van was spotless and way more comfortable than I'd expected. The photos whilst clear did not do it justice. Julian's directions were clear and easily understood by us novices. I would highly recommend this company and already planning another trip.
Sinead Byrne
Caught the motorhome bug
This was our first Motorhome Holiday so we needed some proper advice from the experts! On talking with Julian you can tell his passion for the provision of great customer service, accurate information and sharing experiences! Luxury throughout, beautifully detailed and everything you could need onboard. We were blown away by just how comfortable, warm and easy to setup and function while touring. Utterly relaxing, utterly comfortable and utterly “doing it again!”. Thank you Julian and thanks to your support team. We have loved this holiday like no other and have been bitten by the Motorhome bug!
Mark McDermott